donate
During our recent mission trip to Liberia, we visited Obadiah and his family. They live a block away from the Hope Center. They attend Hope Center Church. His kids go to Hope Center Christian School. ​
​
Obadiah, his wife, and five children live under an extremely deplorable condition. They reside in a dilapidated mat building that has one room. The building has no protective roof, no floor, and no beds. Everyone, including his kids, sleep on mats that are spread on bare floor. And because the building does not have a foundation, the family suffers heavily whenever there is a downpour of rain.
It is not clear if Obadiah and his children can recover from this condition by themselves, since they have no means of income due to the raging effects of poverty in the country. As you know, poverty stands at 64% in Liberia.

However, the good news is that several years back Obadiah had begun constructing his family house (3 bedrooms, one porch, one living room) before the economy's significant decline, which resulted to his loss of every possible means of income. Now, over the past five years, the building has been sitting there without further work. It is halfway into elevation.
Considering the gravity of their condition, coupled with consistent rainfalls in Liberia, Serve Africa is rallying the support of friends to change the course of life for Obadiah and his kids.

We have raised 40% of the amount needed to finish elevation, put roof, lay floor, install doors/windows, and furnish. We need help with raising the remaining 60%.

Would you kindly consider making a generous donation to this important cause? Please know that 100% of your tax deductible donations will go to this very time-sensitive project. Obadiah and his children will forever remain grateful for your support, especially at this critical juncture of their lives.

Please donate here or send a check to our address with Obadiah's House Project on memo line.  ​​

Terry Baxter's presents a personal assessment of his missions trip to Liberia (July 9 -21, 2019) 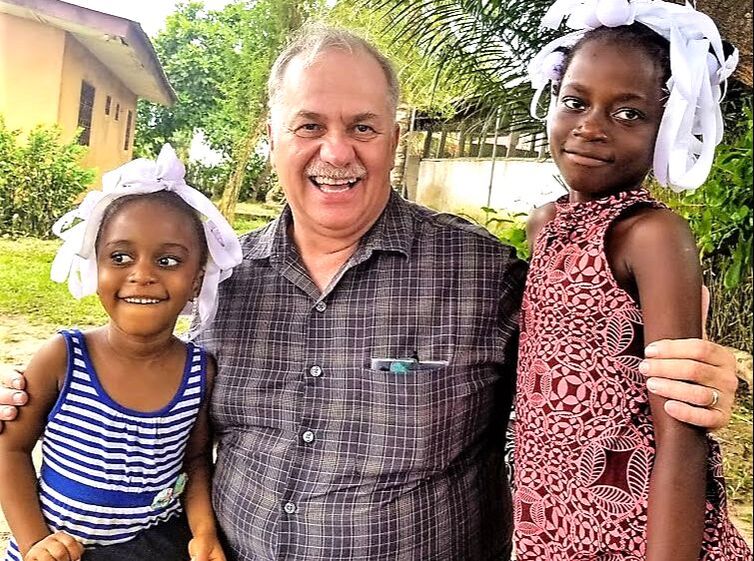 August 9, 2019
I traveled to Liberia with Pastor Stephen Wonbenyakeh and his wife Florence.  They are the founders of a nonprofit ministry called Serve Africa.  This was a fact-finding mission for me to see if GoServ Global could network with Serve Africa on some projects.

I was looking for 1) need, 2) the focus on spreading the gospel, 3) what kind of reputation Stephen had, 4) maturity of the churches, 5) in country leadership with Serve Africa and 6) favor from the government toward future endeavors.  I was pleasantly surprised on most levels.

Upon arrival in Liberia, I was struck by the underdeveloped condition of the airport which pointed to underdeveloped infrastructure in the country.  It was very similar to flying into Haiti with the exception that nearly everyone understood and spoke English.

We arrived late in the evening late and at the motel after a 45-minute drive.  Stephen had rented a Honda SUV for the week and a great driver.  As a whole the driving habits were very good, with the exception that many major intersections do not have stop lights.

The motel was adequate with air conditioning and a breakfast was provided with the room.  It was slightly removed from the ocean by a lagoon and I appreciated the fact that Stephen was not extravagant.

Our first day agenda was to visit the Capital and meet some law makers.  They were appreciative of the fact that an Iowa State Representative took the time to visit them.  One Representative that I met was a solid Christian and a few days later came by the motel one evening to spend more time with us.

He talked openly and passionately about the needs of Liberia.  The unemployment rate is over 60%, there are very few jobs, pay is low even by Africa standards, the education system has never been developed and relatively few children are attending school.  He also mentioned the high number of orphans and poverty children. The few state schools that exist were substandard and medical access is very spars, even nonexistent in remote regions.  He also shared that his district had a refugee camp in a remote area, but did not elaborate.

From his perspective the country welcomes mission work that focuses on church planting with quality schools, boarding for children, and basic medical care as part of their vision.  He said they were free to do ministry without government interference.  He openly acknowledged government corruption, but was confident that nonprofits could import without taxation and many agriculture goods were also exempt.

The second day, a group of pastors that work with Stephen joined us for a trip from Monrovia to Ganta in the North.  The road was paved as recently as 2015 which cut the length of the trip from seven hours to about 3 1/2.  The pastors spoke great English, were very mature and engaged in lively debate over social and political issues.  At times they all spoke passionately at the same time.  I enjoyed that lively part of the culture.  Liberians express themselves openly.

Ganta was a good sized city and fairly modern. We drove to the church Stephen grew up in and met many pastors who were just concluding a pastors conference.  Stephen was welcomed with great joy and held in high esteem.  The church was large and could seat around 400 to 500 people and had a Christian School on the property.  I was very impressed with the discipleship and leadership mentoring efforts of the church.

I was also impressed with the residential building taking place around Ganta.  Most construction consisted of either mud blocks or cement blocks made on site.  The homes had wood rafters which were vulnerable to termites and were mostly sheeted with tin.  The homes were around 900 to 1,100 sq feet.

Stephen kept reminding me that we were in the urban area and the remote regions had homes that were very small and mostly from mud with thatched roofs.  Because it was the rainy season, we did not venture into the remote regions.

We also visited the home of Stephen’s brother, Moses.  He is a very godly man committed to evangelism, church planting and discipleship.  He has planted around 30 churches in Liberia and discipled many men into ministry.

On the way back to Monrovia, we stopped by the parcel of land Stephen had purchased to build another Hope Center. It was only three blocks off the main paved highway in a rapidly growing area.  It had great potential, but he needs to buy more land.  At this point he is buying one or two acre plots for Hope Centers.  From my perspective, he needs 3-6 acre lots.  Potentially more land can be purchased at this site.  It is close to Ganta, and should be easy for transportation of building materials and a good location to host a team.

On Saturday, I helped perform a wedding back in Monrovia at the church Stephen and his ministry partner Emmanuel planted several years ago.  The unmaintained roads in Monrovia were terrible and getting to the church was challenging.  Stephen and Florence have a home at this sight. The wedding was amazing.  It was for Eric and Irene.  Irene is Florence’s sister and she is a key organizer in the Serve Africa ministry in Liberia.  Eric is an immigration officer at the airport and gave me VIP treatment coming into the country.

Another conversation we had related to how Serve Africa could become self-sufficient and self-sustaining.  Stephen and Moses have been looking into palm oil in Liberia.  There is a special palm tree that produces a fruit that can be processes into high demand palm oil.  We need more research, but 50 to 100 acres could produce $80,000 to $160,000 a year in palm oil.  That is enough to fund numerous Hope Centers.  Moses is already experimenting with small plots and making some palm oil with a palm press.  It looks promising.

I also preached in the same church on Sunday.  It was packed. The congregation has totally outgrown the building. About three years ago the church bought a property and started building a new building about two blocks away.  The walls are up and most of the floor is poured, but that’s where they ran out of money.  It will take about $20,000 to finish the building.  We need to find a church in America that will adopt this congregation and work with them.  Stephen is turning the work over to Pastor Emmanuel so he and Florence can focus on Serve Africa and building Hope Centers.

The final day we visited the Hope Center under construction near Monrovia.  Fortunately, it was on a good road in an area with huge construction underway.  They hope to open the school in September and the church about the same time.  They had an open house for those interested in the school and around 500 people showed up.  The one acre site has a school, a church building and an administration building that are almost complete.  A church in Des Moines was helping with this project. They would like ten Safe T Homes on the site for orphans or boarding school children.  It is a valid project.

At the event, I had a lengthy talk with Anita, who is the wife of Moses.  When I asked her what she saw as the greatest need, she quickly replied “medical centers.”  In the remote regions there are not medical facilities.  Anita just got certified as a mid-wife.  She said they need birthing centers.  The vision sounded very much like Haiti.  Most women in the remote regions have home births with no medical care, especially in the rainy seasons.

I came away from my time in Liberia persuaded that Stephen was on the right track wanting to build Holistic Hope Centers across Liberia that include a church, a school, housing for orphans or boarding students and a medical center.  This method has the potential of affecting the course of the entire country.  It is an ambitious and long term vision that is right on target for radially impacting the future of Liberia.
DONATE HERE
UA-185901429-1